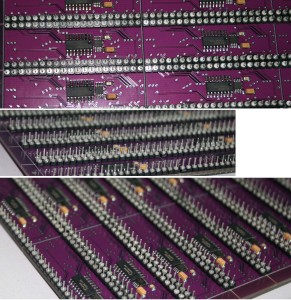 Over the last few months I’ve had several DSS-1 boards sent to me for repairs following unsuccessful modifications. So, I’ve decided to change my policy regarding upgrades. Going forward, I will only support installation by an authorized service center. I only have time to either build the boards, or do repairs and installation, but not both. And it ends up being just as expensive to have the boards repaired as it is to send them to a service center in the first place.

I just received a shipment of DSS-1 upgrade PCB’s the other day, and I’ll be building them up as time permits. I usually do 10 at a time unless I have a large number of orders.

Also don’t forget, if you order more that one kit (including the other ASR-10 and EPS upgrades), I will discount the order by 10%.

I finally have the site moved over to a new server and am using WordPress. All thanks to my brother Paul, who did a superb job on this site and his own, Airborne Sound.

I have the following boards available now:

Prices do not include shipping. For small orders, shipping is $15 in the lower 48 United States, $35 for the rest of the world.

I got new code from Jim to address the differences in the new floppy controller. It got past the floppy initialization stage just fine, but got hung up initializing the sound generator board. Turns out that the Xilinx XC9500XL series don’t have the same drive capability of the older, 5V XC9500 series. In theory, the existing pull-up resistors should have helped, but I’ve now had to make an add-on board with additional buffering cicruitry. This will just be for the prototypes, the production units will have them integrated onto the main board.

I’m getting quite a few inquiries about when the project is going to be ready; a number of people have checked in every month to see what’s happening. We’ve finally got the firmware loader written, so at least the main firmware can be updated by the end user. Assuming that the sound generator is the last major hurdle, I think that we are on track for an end of year release.

So, I have started debugging the new CPU board. Amazingly, the first time I powered it up it booted to the sign-on message. It got stuck there, so I hooked up the logic analyzer to see where it was at in the code. As I suspected, it was getting hung up trying to access the new floppy controller. Although the i82078 (the new controller) is register-compatible with the uPD765 (the original DSS-1 controller), it needs to be initialized quite differently. I’m hoping to have a fix for it this week.

Once the floppy is working, the next task will be getting the new USB controller up and running. The firmware that FTDI supplies is supposed to be compatible with the VNC-1 command set, but things are rarely ever that easy 😀

Wow. It’s been eight months since the last update. A lot has happened with the project, as well as my personal life in that time. The project is alive and well, although in suspended animation. I’m actually just about to start testing the new revision of the CPU board. One of the big delays on the project was that FTDI Semiconductor, who make the VNC1L chip that powers the USB part of the CPU board, came out with a new, improved version, the VNC2. Unlike the VNC1, the VNC2 comes with a free IDE (integrated development environment) and royalty-free RTOS (realtime operating system), which allows complete customization of the USB firmware. Previously, you were limited to whatever firmware FTDI developed for the VNC1 (along with its bugs and limitations).

They say things happen in threes, and for me that’s no exception. As of today, I have a new job, a new house, and in January my wife and I will be having our first child. Things like that kind of put weekend projects on the back burner. However, I’m still working on the project. It’s a lot closer than it was, but will still have to wait until the USB firmware matures to a point that it will be user-updatable. The long term plan is to have totally custom firmware tailored for the DSS-1. That is almost as big of a software project as the DSS-1 code. Luckily the out-of-the-box firmware provides enough functionality for 90% of our needs.

I’m putting together a mailing list for all the people who have contacted me wanting to purchase an upgrade kit. So far, it’s well over 100 people, far more than I expected, and a good reason to get the new boards out the door ASAP.

Sales have picked up in the new year. Many people are waiting for their tax return I suspect. People seem to be pleased with the modification so far.

The latest firmware version 4.01 adds support for a second USB port. This needs an addtional cable soldered to the VDIP module. I had originally planned to implement this with the combo drives that have the USB port on the front. However the few that I’ve ordered are all flimsy and don’t have mounting holes in the proper position for the DSS-1. One drive looked like the floppy mechanism was salvaged from a surplus parts store, as the top was all scratched and had large chunks of dust (!) inside the floppy. Beware the Sabrent, Nippon Labs, and Bytecc brands.

I’ve also started selling my modded DSS-1’s. I’ve got about 6 left as of this post.

Another improvement I’ve made is to reduce the high frequency whine being induced into the audio path. Routing the two connectors (J10 and J11) over the left side of the KLM-780 board insted of having them come from the back, getting them as far away as possible from the audio jack board, gets rid of the whine when loading and saving. These connectors are the address and data bus connections from the sound generator board which are active any time sound is getting transferred to or from the Wave RAM.

Currently there are 6 kits left and 6 DSS-1’s available.

Well, three sales so far. One kit, one board mod, and one full DSS-1 mod.

Bought another unit off of eBay, unfortunately the seller didn’t pack it very well, and one of the black keys got broken. Good thing I have a parts unit.

V 3.99 has a bunch of fixes in it for USB saving and loading, also adds directory sorting and navigation improvements. Also discovered, while building up more boards, that the byte counter pin on the CPLD needs to be disconnected from the ribbon header, or the signal reflections will corrupt the count.

I’m going to start selling my other DSS-1’s on eBay. Time to start making room for the next project.

Oh yeah, a big thank you to Glen Stegner for his awesome review of the project on his site!

I’m finally going on vacation! It’s only for a few days but it couldn’t come at a better time.

Jim continues to squash the odd bug here and there in the OS (currently 3.94 as of this entry). Portamento has been added, as has the ability to update the OS from a USB storage device. I’ve started compiling libraries onto flash disks, and am going to include them with the purchase of the kits (while supplies last!).

I’ve documented the install procedure and am in the process of writing the manual. I’ll probably get it done this weekend.

Picked up another used DSS-1. Someone had really bitched it trying to get it open. One side of the case was gouged where someone stuck a screwdriver trying to pry the lid up when the screw stripped. I found the reason why they wanted to open it up, a nice puddle of dried up soda right next to the power supply. Luckily it didn’t get in the electronics.

Also, I have lowered the prices on the LCD and combo drive options, as I’ve found lower priced options for both. The new LCD is yellow-green, not as flashy as the blue-white but still much better than no backlight at all!!

I’m going to start selling off my modded DSS-1’s. I think the software is at a point where it is pretty solid, and updating will be a breeze thanks to the flash ROM.