Or, The Case of the Missing Power Supply

I have a tendency to pick up broken synths on eBay and try to fix them up. Many bargains can be had, and more than a few lemons. I’ve had pretty good luck so far, and managed to make a bit of money buying, repairing, and reselling these instruments. Most times the problem is easy to fix. Sometimes, it is laughably simple. Many people use an AC wall wart where a DC one is needed, and then think it’s broken because of the hum and buzz in the audio output. Another time I had a Korg EX-8000 that wouldn’t make any sound. Turns out that the split zone parameters (which were not silkscreened on the front panel – probably because of a software update) were set such that the instrument wouldn’t play any sound.

So, I found a used Yamaha SY-99 on eBay. It was missing the power supply…however the seller claimed that it ‘was still avialable’ (q.v.) from Yamaha. I already had a SY-99, and figured I could sell it, buy the broken one for cheap, buy a replacment PSU, install it, and come out ahead, right?

I paid for the SY99, and the seller promptly shipped it to me UPS ground. Now, say what you want about UPS, but so far I’ve had good luck with them (although I use DHL for my own shipping). When it showed up, I lugged it up the stairs and opened it up. My heart sank as I saw shards of black plastic everywhere. Upon closer inspection, the two black plastic end caps had been thoroughly smashed. Although they retained their basic shape, there was no support attachments left, and in fact, there were only four screws holding the bottom plate to the instrument…the plate that normally anchors the sides in place.

A call to the Yamaha parts department revealed that the end caps were still available, for about $50 each. However, the power supply, transformer, AC cord clamp, and software updates were no longer available. They couldn’t even sell me the black metric screws that held the bottom plate on!!!

They did have the service manual, so I purchased one, and waited for the parts to arrive.

Meanwhile, I had contacted the seller and conveyed my profound disappointment on the condition of the instrument, the fact that contrary to his assertion that power supplies could be had, they were nowhere to be found. I also had to ship the instrument back to Baton Rouge, so the local UPS shipping depot could assess a damage claim. Their conclusions, to nobody’s surprise, was that the seller had packed the shipment improperly. I had the SY-99 shipped back to me, fingers crossed, dreading the condition in which it would arrive.

I thought that I might try a well-respected local service center, Advanced Musical Electronics. I had used them before and had been very happy with their service. I also knew that they had access to vendors and resources that I didn’t. They don’t sell parts to the public so I decided to let them get all the parts and install them (it turns out the SY99 needed a new high G key as well).

A few days later, I got a phone call. They had installed the new high G key, but power supplies were nowhere to be found, nor were the software updates. Looks like the people in the Yamaha service department knew their stuff.

The eBay seller by this point had stopped responding to my emails about the UPS claim, which I knew would be futile since it wasn’t insured or packed properly. Thanks for nothing.

So by this point, I knew I had to ‘do the nasty’ i.e. come up with a power supply on my own. Once again, I had to use my guerilla reverse engineering skillz to bring this bucket bolts back to life.

The SY99 service manual, although reasonably priced, seemed to contain mostly documentation (in English and Japanese) about the service diagnostic features. At the very end of the manual were the schematics, reduced in size so much that I needed a magnifying loupe to read them.
However, the manual did contain images of the bare PC board…exactly what I needed to get started. 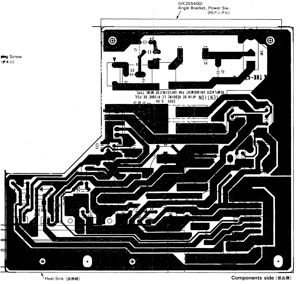 As with other boards I’ve done this way, the correct scaling had to be applied to the drawing. About the only reference point I had on the artwork was the spacing of the pads of the TO-220 regulators. Using this, I was able to determine that the drawing needed to be scaled 120%.

I used Afloat, a handy utility, which allowed me to overlay the original PCB artwork with the PCB design program, to trace the design. FIrst, component footprints were placed, then connections made with normal sized tracks, then finally, the large copper areas were filled in with polygons. 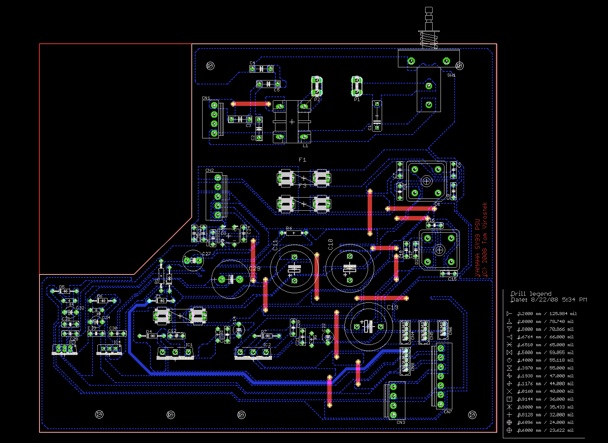 I had the boards manufactured without silkscreen or soldermask, so save money. Most of the parts were easy to find. The smaller connectors were metric Molex microblade connectors, the larger ones JST connectors. The two large 5A regulators were actually populated with smaller regulators on the original SY99 supply. I replaced these with LT1084 regulators which matched the PCB layout.

The original Yamaha power transformer was also not availaable, so I used a toroidal triple-secondary transformer and made a custom mounting plate that matched the internal extrusion dimensions.

The board ended up working very well. I had to machine a heatsink to fit in place of the original Yamaha one (surprisingly, no longer available).

Moral of the story: you want something done right, you have to do it yourself. And to the person who sold me this keyboard: Thanks for your half-assed attempt to help me, but I’ve taken care of it.