I purchased a beat-up EIII rack (quite rare) from eBay not long ago. It wouldn’t power up, but would just ‘clunk’ once per second. I replaced all of the electrolytic caps on the power supply, re-installed the supply, but had the same problem. I sent it to Nyco Systems, where they replaced some other caps, but it still didn’t boot. I soon discovered that the 120V/220V switch was broken, so I hard-wired the switch, and SUCCESS!

(I should mention that the power supply was probably fine except for the voltage selector switch.)

It powered on and booted but the LCD backlight was almost dead, and a bunch of the switches didn’t work. I found a nice OLED display from Newhaven Display, and replacement switches from Digi-Key. It’s now working perfectly. 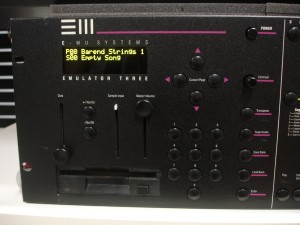